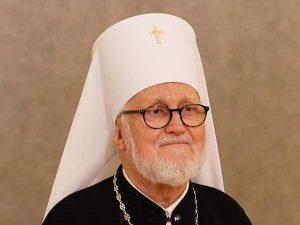 He studied at the Saint Serge Orthodox Theological Institute in Paris and was a disciple of Father Sophrony (Sakharov).

In 1974 he was ordained a priest by Archbishop George (Tarassov) and for many years was responsible for the television program “Orthodoxie” on France 2.

He was subsequently appointed rector of the French-speaking Orthodox Sainte-Catherine-Sainte-Trinité parish in Chambésy-Geneva, which he served for nearly 40 years.

On February 13, 2015, the Holy Synod of the Ecumenical Patriarchate, on the proposal of His Holiness Ecumenical Patriarch Bartholomew, unanimously elected the Reverend Archimandrite to the ecumenical throne John (Renneteau) bishop of Charioupolis, auxiliary of the Patriarch, and made him made available to the Patriarchal Exarchate of Orthodox churches of Russian tradition in Western Europe.

The ceremony of the small and large Message of the new Bishop John of Charioupolis took place on March 3, 2015 in the Patriarchal Church of Saint George of the Phanar in Istanbul.

His episcopal ordination took place on March 15, 2015, at the Stavropegic Church of Saint-Paul of the Orthodox Center of the Ecumenical Patriarchate in Chambésy (Geneva).

On March 28, 2016 the Extraordinary General Assembly of the Archdiocese of Russian Orthodox Churches in Western Europe appointed His Excellency Bishop John of Charioupolis for the canonical election of the future Archbishop by the Holy Synod of the Ecumenical Throne.

On April 22, 2016, the Holy Synod of the Ecumenical Patriarchate confirmed his canonical election and elevated him to the rank of Archbishop-Exarch of the Exarchate of the Orthodox churches of Russian tradition in Western Europe.

On May 2, 2017 His Eminence Archbishop John of Charioupolis, Exarch of the Ecumenical Patriarch was appointed Knight in the National Order of Merit by decree of the President of the Republic.

Following the decision of the Holy Synod of the Ecumenical Patriarchate to revoke the Tomos (1999) of the Exarchate of Orthodox parishes of Russian traditions in Western Europe (the Archbishopric) on September 14, 2019, His Eminence Archbishop John restored the communion of the Archdiocese with its historical roots the Russian Church of the Moscow Patriarchate, founder of this Archdiocese.

On November 3, 2019, during the Divine Liturgy, Archbishop John of Dubna was elevated to the dignity of Metropolite, in the words then pronounced by Patriarch Cyril: “Having regard to the firm stand in the name of canonical truth and pastoral work ”.