Celebration of the Centenary of the Archdiocese

On Sunday 26th of June 2022 for the occasion of the Centenary of the Archdiocese of the Orthodox Churches of the Russian tradition in Western Europe, a solemn Divine Liturgy was celebrated in the Cathedral of Saint Alexander Nevsky in Paris.

Metropolitan John of Dubna, presiding, was surrounded by the two assistant bishops Symeon of Domodedovo and Elisha of Reoutov, 14 priests, 6 deacons as well as numerous subdeacons and acolytes. The singing was provided by the choir of the Cathedral under the direction of the protodeacon Alexandre and that of the French speaking “Crypt parish” directed by Pierre Rehbinder.

The celebration took place with fervour and emotion, aroused simultaneously by the Jubilee character and the painful tribulations which particularly affect the Orthodox peoples from whom many members of the Archdiocese come. In his homily (see video at 1h 30mn 50 sec ) Metropolitan Jean recalled that the Archdiocese was carried by these many people, clergy and laity who, often in destitution, wanted and knew how to transmit the Orthodox faith in this western European context.

After recalling that during the 20th century the Russian land was an altar of millions of sacrifices in the name of Christ, he underlined, citing Saint Seraphim of Sarov, that to be a Christian is to open one’s soul to the Holy Spirit and to His peace. After reading Patriarch Kyril’s letter of congratulation, His Eminence called for “praying that the Archdiocese will continue its vocation of mission carried by the Saints of Russia and Western Europe”

In the afternoon, after sharing a fraternal buffet, the assembly heard a lecture by Oleg Kobtzeff , professor at the Saint Sergius Institute of Theology, retracing the major stages in the life of the archdiocese during the hundred years passed.

On this occasion, the site of the Centenary of the Archdiocese was unveiled, presented by Mr. Nicolas Lopoukhine.

https://www.centenaire-archeveche.org  in which one finds a very rich documentation in 3 languages on the history of the Archdiocese and its parishes. Through a great wealth of documents, videos and audios, the biographies of many personalities who have marked the life of the Archdiocese are offered. 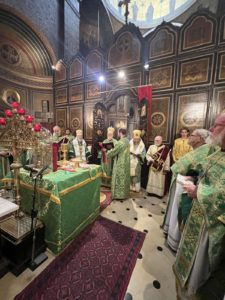